The Last Time I Said I Love You 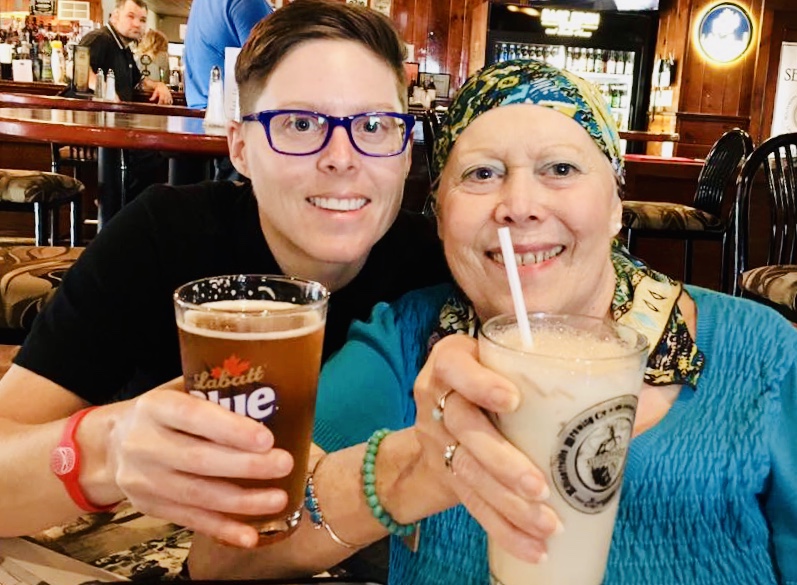 Yet the wind is blowing through the trees so hard it’s tearing the bright colored leaves off its limbs, one by one. The clouds are sailing across the sky as if they are in a race without a finish line. And the sky is darkening earlier that I’d like it to.

Life appears to slow down, even stop when someone is dying. But it doesn’t. It’s an illusion. Maybe it appears that way because we force ourselves to pause for a moment and take in the world around us more than we would on the average day.

It’s fall. November. Traffic is moving. I’m driving into town to pick something up from the drug store. In the aisle, I see the game of Life. I slide my hand across the box. Just the other day, I told my daughter we should get it. She’s six and she loves board games.

I pick up the box and wander through the store, forgetting what I was there for in the first place. When I find myself staring at a shelf full of batteries, I realize that’s what it was. Batteries. I grab a pack of AA’s and head to the counter.

What was the last thing I said to her? On FaceTime? On the phone?

The last time I saw my mother was in June. My wife and I brought our daughter down to my parents’ house, just outside of Atlanta, for our yearly spring visit. At the time, my father had just started his chemo treatment for lung cancer. My attention was focused on him. It often was.

What were the last words I said to her? I can’t remember. Were they kind? Did I tell her I loved her? I must have.

My mother and I had brief conversations during the visit, but we didn’t talk much. We never did. My relationship with her had deteriorated over time. Not in a bad way. We just didn’t connect anymore. Distance had something to do with it, since we didn’t live in the same state. But that’s only a small part of it. A fraction, really. The truth is my mother and I didn’t talk because we didn’t have anything to talk about. She barely knew me and what went on in my life. She hardly called. And me, well, I gave up trying on my end.

Maybe, I should have called her more. Tried harder. These are the things we tell ourselves after the fact, right? That we should have done better?

I used to tell my mother everything. When I was a teenager, before she got diagnosed with Lupus. I’d talk to her about my dreams, my crushes, my feelings. And she’d listen. When she hugged me, I felt the warmth of a mother’s love run through me. But things changed. As time went on, she faded away into her disease like a turtle into its shell. She only felt safe and secure within the confines of the four walls of her bedroom. Television gave her comfort, an escape. She lived vicariously through TV characters. As I grew up and evolved and navigated the unsteady waters of the real world, we drifted even further apart. The myriad of emotions I’ve experienced with my mother have run the gamut and back again.

Human relationships, parental in particular, are sometimes complicated, messy even.  But I made peace with the way things were with us, what it became, what it was. I’m so thankful for that. I know the picture I’ve painted of mother so far is a sad one. But like a painting, there’s more than one way to view it. Within the dark shades, you can find plenty of light. Within my mother and I, there was plenty of light, too. She was my biggest cheerleader when it came to my writing. She saved all of my letters and stories from when I was a kid, kept my young adult LGBT novel on her nightstand.  She put me in writing camps. She told me I’d make a great sportswriter and that’s what I should do for a living (to which I often balked even though she was right). And after I came out to her and my father, she was the first one to put her own bias aside and extend me a loving hand—telling me she’d proudly come to my wedding if I ever got married to a woman, genuinely asking me about my girlfriends, and often mentioning what Ellen DeGeneres was up to as if the two of us were old gay friends. When I finally did get married and my wife had a child, she loved that little girl to the moon and back, and showered her with attention and affection.

My mother was big on affection—hugs and kisses, voicemails with happy birthday songs and cards with smiley faces in the “O’s.” She was gullible and naïve in such a childlike way that it was part of her charm. And damn, was she a good teacher. She taught first grade for many years—I think it was the only thing she ever truly gave herself credit for. She could often be silly and sweet and kind, almost to a fault.

One of the last times she was out and about with me during one of her visits here, we went to Walmart. She scored some cheap sunglasses and was so giddy about them. But as soon as we reached the parking lot, one of the lenses broke and fell out. She stared at me entirely perplexed, looking like a pirate with spectacles, and we broke out laughing. We laughed for a few minutes or so. It felt good to laugh with her.

Did I ask her how she was feeling? Did I say . . . what did I say? I know I told her I loved her. I must have said it. I always say it. I just can’t remember when we last spoke. A month ago? A couple of weeks ago?

My mother’s health was poor all around. She had survived cancer a few years ago only for it to return again at the end of this summer. The chemo treatment this time around did her in. Her esophagus was damaged from all the vomiting, and when she was in the hospital recovering from that, she had a heart attack. They put in stents, stopped the chemo and focused on healing her esophagus. But she wasn’t lucid. An MRI showed that she’d had had a stroke.

There was nothing more anyone could do for her.

It all happened so fast. Within the span of a week or so. I never had a chance to say goodbye when she was coherent, to see her or talk to her, for her to hear my words and understand them. That’s why I keep going over it in my head.

We said I love you every time we said goodbye and hung up the phone. Did I say it one last time? I must have said it. I’m sure I did. But did she know I meant it?

There’s is no moral to this story. No sound advice. No lesson I’m trying to impart. The bottom line is this—we don’t always get the chance to tell the people in our lives how much we love them or that they are important in more ways than we ever cared to show them. I’m not going to sit here and say, that’s what you should go and do. Tell them all you love them. Tell them now. Tell them you mean it. Because no matter how many times it’s already been said, we always count on the fact that it won’t be the last time. It’s what we do. It’s what I did.

Sitting in the hospital room by myself with her lying next to me, there but not really there, I say the words out loud now, hoping they’ll catch onto the wind and find their way to her soul. I hold her hand and squeeze it. I kiss her forehead. I smile, I cry, I laugh. I shake my head. I say it again and again. And again.

For some reason I can’t adequately explain, I know she hears me. And I know she knows I mean it. Even now. Even after she’s gone.

18 thoughts on “The Last Time I Said I Love You”